The Libyan American Alliance(LAA) welcomes the passing of the Libya Stabilization Act (H.R. 1228) and Urges the US Senate to do the same so President Joe Biden can sign it into law.

The Libya Stabilization Act was introduced in the House back in February by Congressman Ted Deutch and passed today by a large bipartisan support. The Act requires the administration to issue reports on those who seek to destabilize Libya, commit war crimes, and violate the UN security arms embargo. The Act asks that the administration impose sanctions on anyone or any entity that is implicated in these reports.In addition, the Bill requires the administration to articulate a strategy to deal with the Russian presence in Libya and especially the Wagner group.

Dr. Esam Omeish, LAA President said “We applaud the efforts of members of the US House and especially Congressman Ted Deutch and Representative Joe Wilson for their leadership on this Bill that says that anyone or any entity that seeks to destabilize Libya will be held accountable and will face the consequences.”

Mongi Dhaouadi, LAA Executive Director, said that “We call on the US Senate to do its part and to pass its version of the Libyan Stabilization Act and put this Bill on President Biden’s desk.” He added, “the act is meant as a great tool to help Libyans build their democracy and their state institutions and protect the vulnerable immigrant and refugee groups.”

LAA has been advocating for the Libya Stabilization Act since 2019, when it was first introduced and facilitated countless meetings between Libyan Americans in various US states and their representatives. Daouadi said, “we will continue these efforts until this bill becomes a reality.”

As experts agree, U.S. leadership in Libya is critical in stopping the ongoing foreign intervention, ending the conflict, and ultimately, paving a path for a stable, democratic Libya. In the absence of executive action, in 2019, the Libya Stabilization Act (LSA) was introduced in both the U.S. House of Representatives and the U.S. Senate. Since then, the Libyan American Alliance has worked as a strong activist for the LSA, including developing a toolkit for action to help Libyan Americans advocate for the bill. In December 2019, the LAA organized a Capitol Hill presentation that featured LAA non-resident fellow Dr. William Lawrence, Dr. Theodore Karasik, and Jason Pack in a discussion on Libya’s current situation and how the bill can help address it, moderated by LAA Director of Media and Communications, Mosadek Hobrara. LAA continues to meet with multiple congressional offices, civil society organizations, and other political institutions about supporting the Libya Stabilization Act. This bill requires the U.S. administration to clarify its strategy in Libya, report on foreign interventions, and impose sanctions on those who violate the arms embargo or seek to undermine the stability and security of Libya. 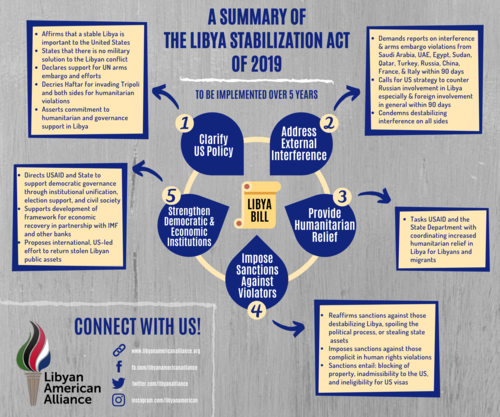